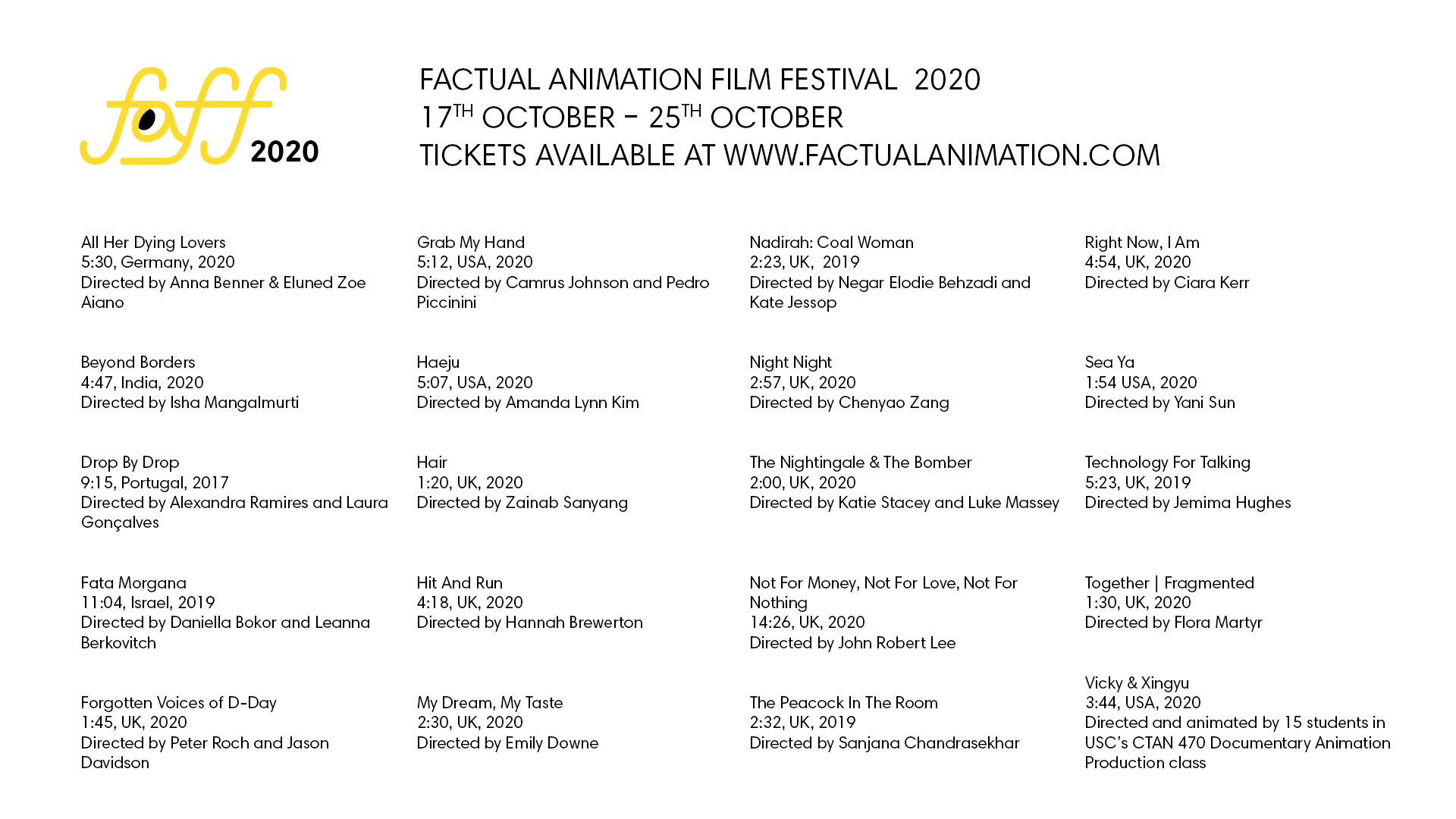 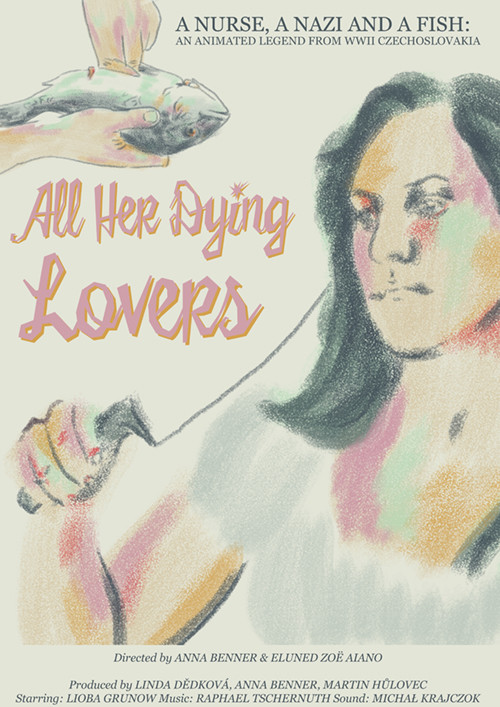 All her dying lovers
Duration: 01:08
Directors: Anna Berner & Eluned Zoe Aiano
Germany, 2020
ALL HER DYING LOVERS is based on a tale that started out as a rumour from WWII Czechoslovakia and ended up in the international tabloids in 2014.
The story in question involves a nurse, Nazis, seduction and syphilis, but no-one can agree on what really happened. Our film re-investigates this urban legend through interviews with the town’s present day residents, which are used to create an animated portrait of the unknown woman at the heart of it all, who may or may not been a feminist heroine and who may or may not have existed. Through the combination of animation and speculation, the film gives the story back its poetry, while also rooting it in the reality of the woman’s life, as we see her going about her daily activities: getting dressed, making dinner, mending clothes. This juxtaposition between the shocking nature of the events and the banal familiarity of the actions performed on screen play on tropes of femininity and the perceived roles of women, while allowing the audience space to make their own judgements. 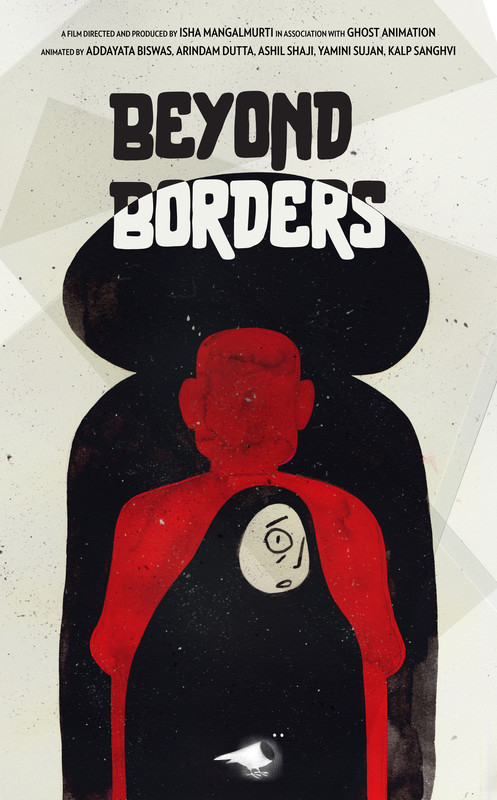 Beyond Borders
Duration: 4:47
Director: Isha Mangalmurti
India, 2020
Beyond Borders is a short animated documentary narrating the story of Dr. Alan Pereira, a humanitarian doctor from India. The documentary takes one through the experiences of working as a humanitarian medic in war zones around the world today. As the nature of wars has changed over the last century, so has the role of humanitarians become more and more vital. However, Medical facilities are becoming a primary target in armed attacks, infringing the Geneva Conventions and posing a severe threat to the lives of those working in these conflicted zones. Beyond Borders takes one through the personal experiences of Dr. Alan and looks at how he along with numerous other humanitarians continue to persistently work through these challenging conditions. 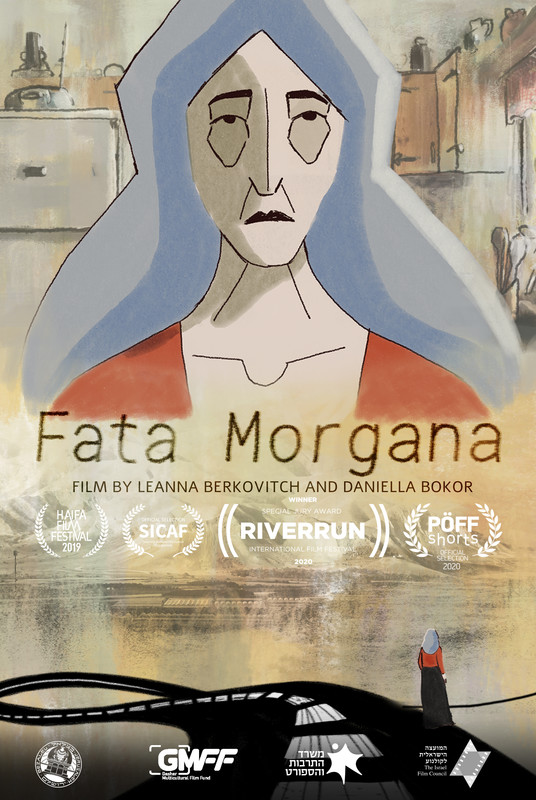 Fata Morgana
Duration: 11:04
Directors: Alexandra Ramires & Laura Gonçales
Portugal, 2017
Three women living life as nomads. Christina travels the world, Anna takes her daughter wherever she goes, and Rachel has made her home under a branch roof, in a tent and in a cave .
What does each woman pack in her knapsack before she sets out on her own?
The movie confronts the conflict between the stability of motherhood and life at home, and the yearning to wander 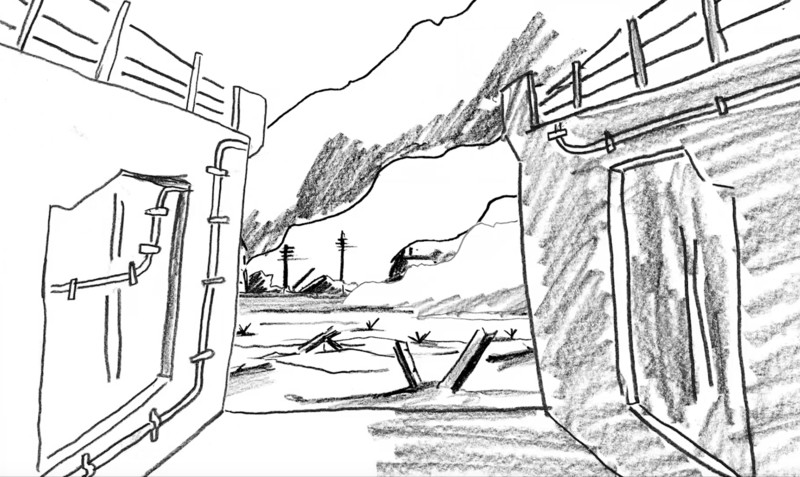 Forgotten Voices Of D-Day
Duration: 1:45
Directors: Peter Roch & Jason Davidson
UK, 2020
This moving short film was created to mark the 75th anniversary of the D-Day landings, utilising forgotten audio recordings taken from the Imperial War Museum archive. This short brings to life the incredible testimony of a D-Day veteran through animation and sound. Our story focuses on John Clegg, Royal Marines Armoured Support Unit, who describes what it was like to land on the Normandy beaches 75 years ago. 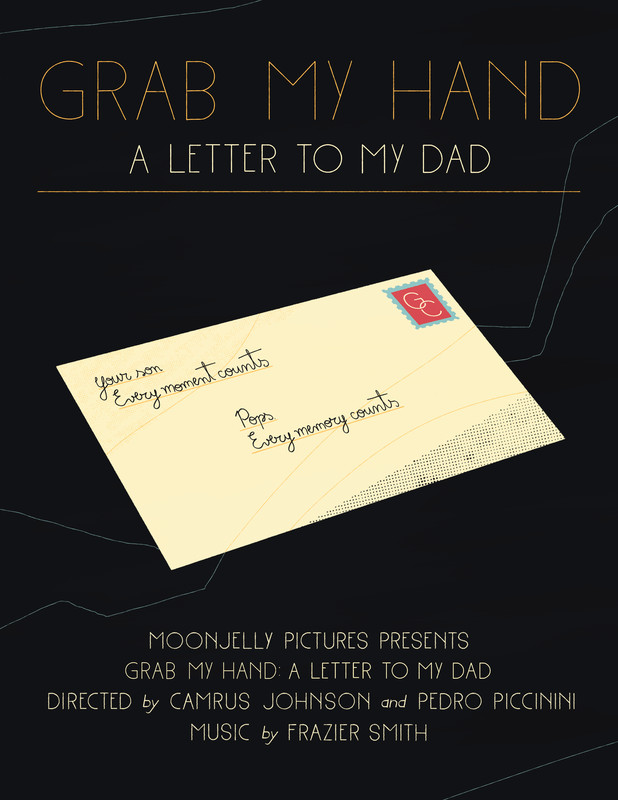 Grab My Hand: A Letter To My Dad
Duration: 5:12
Directors: Camrus Johnson & Pedro Piccinini
USA, 2020
A personal story of grief, those we look up to, and how the interactions we may deem insignificant may play a huge part in how we live our lives. 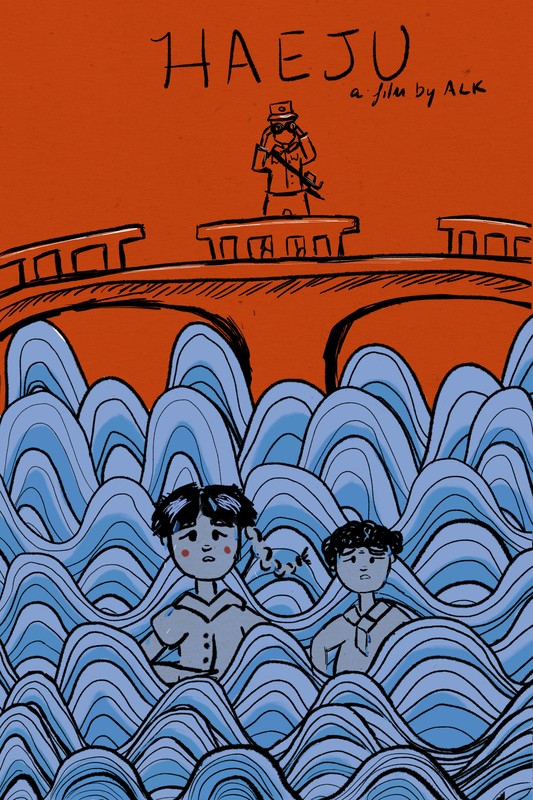 Haeju
Duration: 5:07
Director: Amanda Lynn Kim
USA, 2020
Generational differences emerge while a Korean American granddaughter tries to connect with her grandmother over the story of how she escaped from North Korea and survived the Korean War. 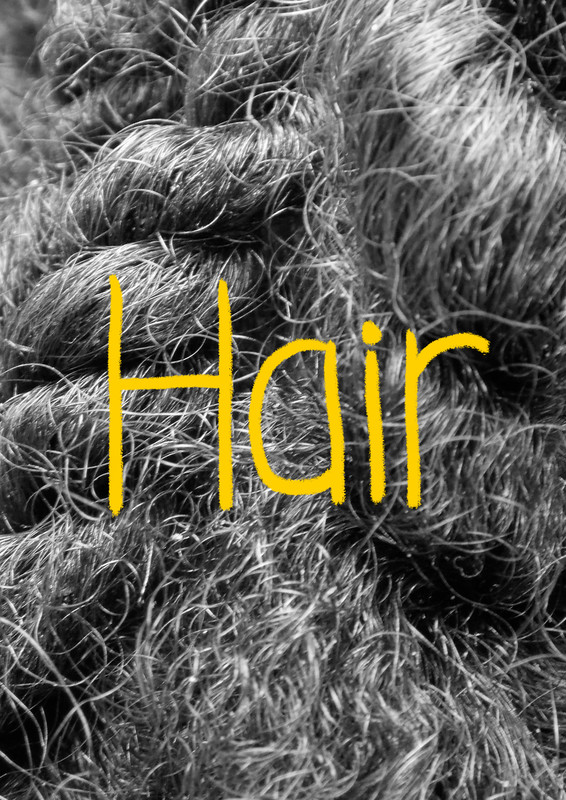 Hair
Duration: 1:20
Director: Zainab Sanyang
UK, 2020
This is an animated film promoting hair positivity in people with afro hair. including Interviews from people with a variety of afro hair textures. 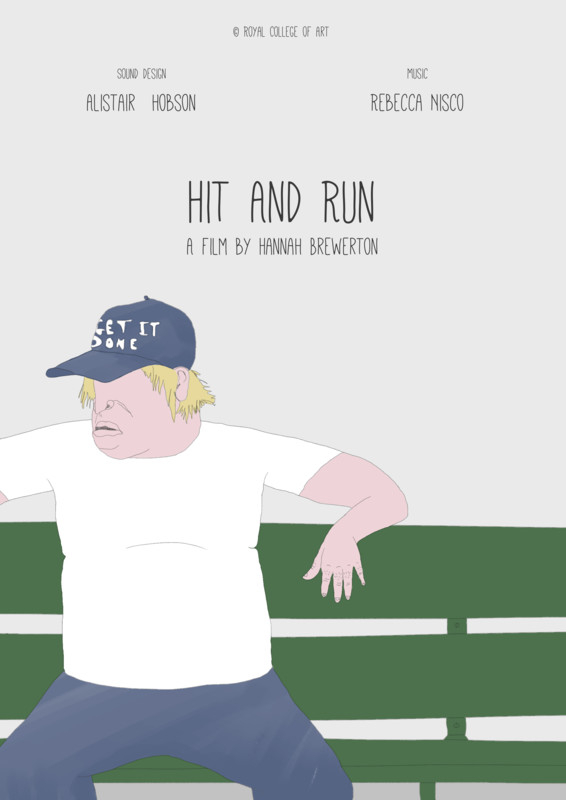 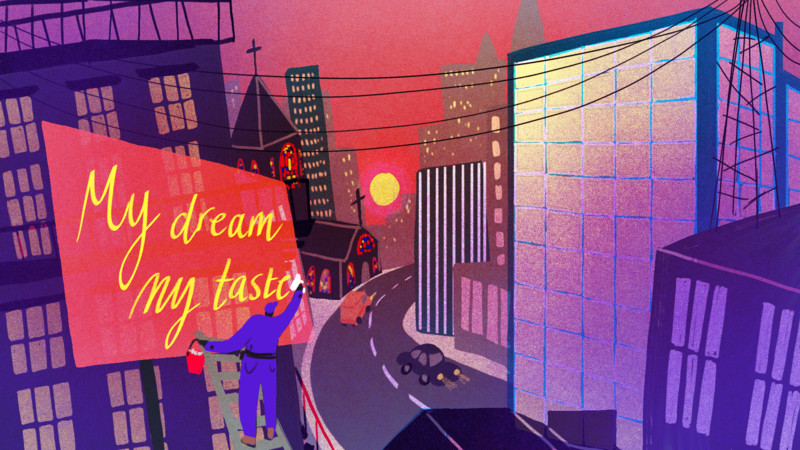 My Dream, My Taste
Duration: 2:30
Director: Emily Downe
UK, 2020
What does it mean to live a good life? This elegant, meditative animation – narrated by Yale University’s Miroslav Volf – asks this crucial question as we follow a young woman who, as she pursues her dreams, risks becoming detached from the world around her. 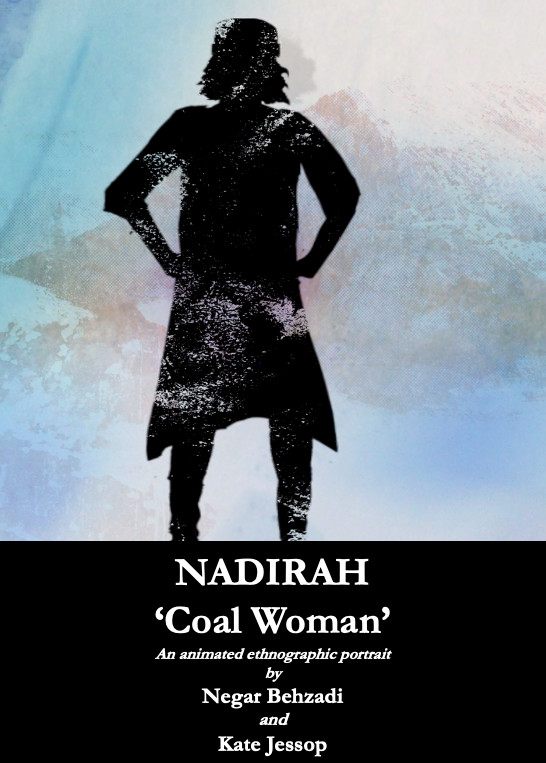 Nadriah: Coal Woman
Duration: 2:23
Directors: Negar Elodie Behzadi & Kate Jessop
UK, 2019
In Kante, a small village perched at 2000 metres in the Fann Mountains of Tajikistan, the work of the 19 women miners who go mining everyday in the illegal coal mines is considered as ‘ayb’ (shameful). ‘Nadirah: coal woman’ tells the story of one of the most stigmatised women miners in this village. Based on a collaborative feminist art-research project between the animation artist, Kate Jessop, and the geographer and ethnographer, NegarElodie Behzadi, this project makes visible otherwise invisibilised stories of shame. The animated ethnographic portrait raises awareness of issues around gender, work and exclusion, women’s restricted access to natural resources, and their stigmatisation in a desolate extractive landscape.

Night Night
Duration: 2:57
Director: Chenyao Zang
UK, 2020
A documentary animation about bipolar disorder. The film is base on the video interview with my friend through WeChat. It documents the process that I trying to understanding the condition and also know more about my friend. 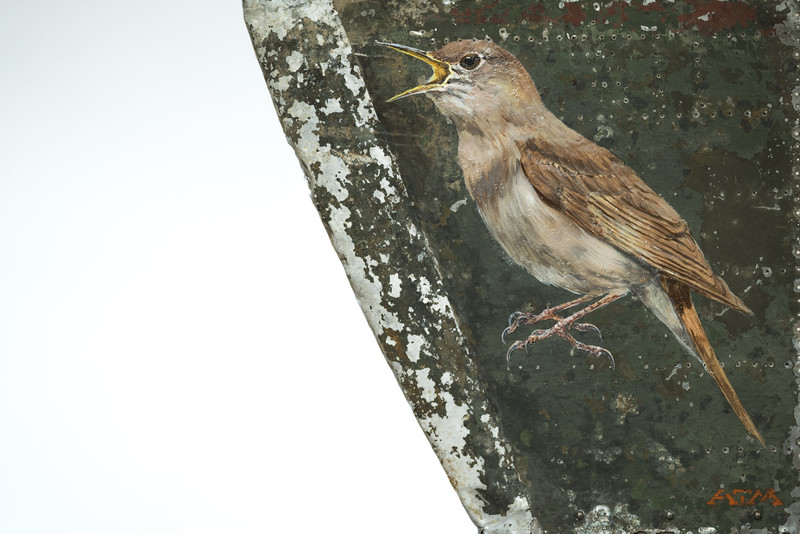 In the spring of 1924, the first ever live-to-radio broadcast from an outdoor location was a duet between cellist Beatrice Harrison and a singing nightingale in her garden in Surrey. A million people listened in and the programme was picked up as far afield as Italy, France, Spain and Hungary. Over 50,000 fan letters were received and the nightingale live-broadcast tradition was maintained as an annual event by the BBC until May 19th, 1942.

As the BBC began the 18th annual broadcast the microphones picked up the sounds of 197 Wellington and Lancaster bombers en route to Germany. Realising a live broadcast of the bombers could warn Nazi spies of the impending attack, the broadcast was hastily cancelled. However the lines were still open and both nightingale and bombers were captured on acetate disc – a haunting combination.

In remembrance of this astonishing story, Sunbittern Media, the makers of The Last Song of the Nightingale, asked renowned street artist, ATM, to paint a nightingale on the tail fin of a Vickers Wellington Bomber. This piece of art entwines nature with man and acts as a symbol of this historic event. 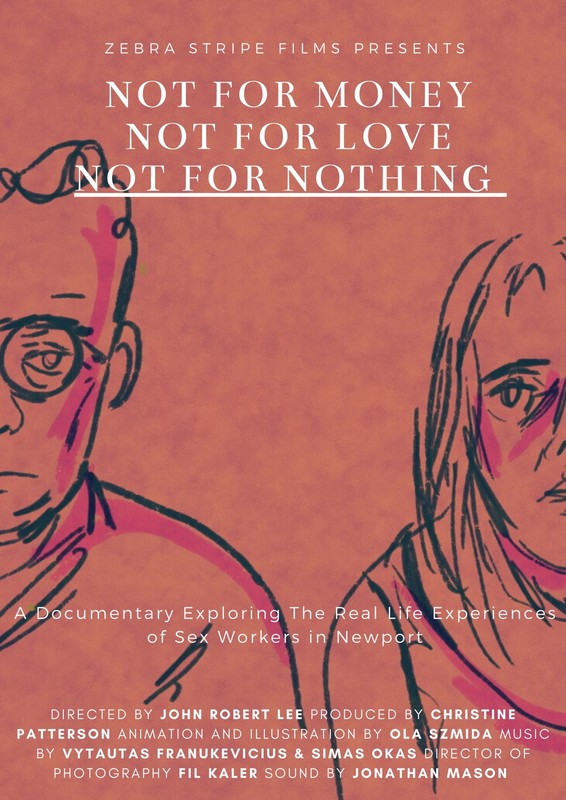 Not for Money, Not for Love, Not For Nothing
Duration: 14:26
Director: John Robert Lee
UK, 2019
In the underground world of money and sex, this emotionally engaging documentary gives rare insight into the reflective personal struggle of sex workers. Using animation for anonymity, real questions are deliberated by real women, sharing their real stories.

The film follows Paula, who came to Newport on a spiritual mission to help women who have become trapped by abusive relationships, enslaved by a broken system, and beaten by those who pay for the privilege.

She meets with Jo, who shares her story of breaking free from a pimp to start her own brothel, Chelsea who feels low self esteem, Rachel who questions her morality, and Amelia who feels a strong sense of loneliness. 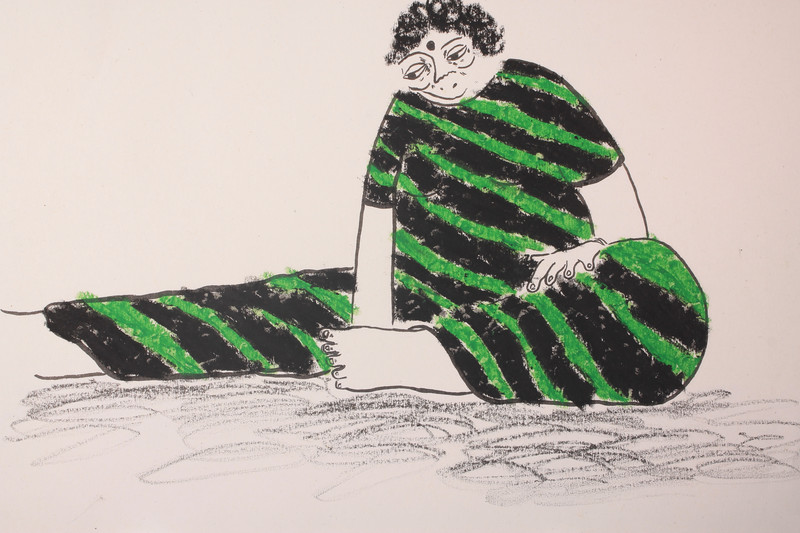 The Peacock In The Room
Duration: 2:32
Director: Santana Chandrasekhar
UK, 2019
An intergenerational film that explores the relationship between my mother and her mother, during challenging times. As my grandmother’s perception of reality is distorted by her Parkinson’s disease, my mother attempts to understand and embrace her world. 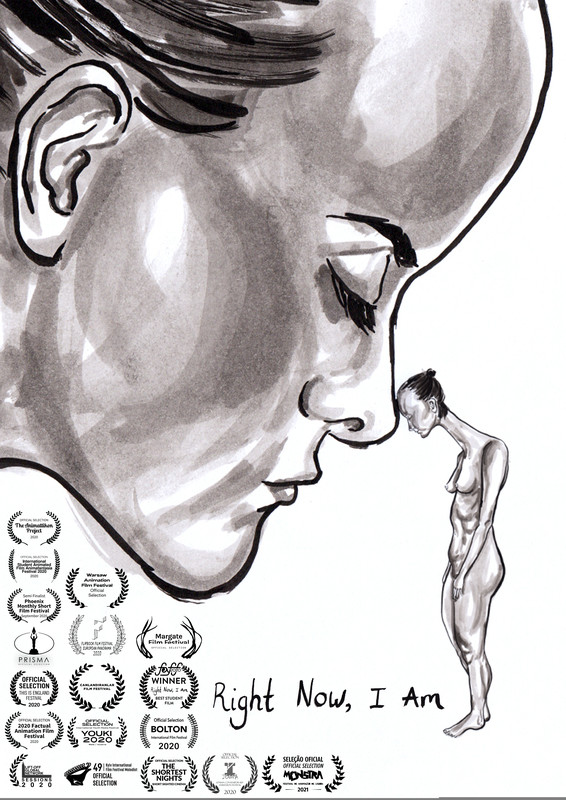 Right Now, I Am
Duration: 4:54
Director: Ciara Kerr
UK, 2020
‘Right Now, I Am’ is an autobiographical, emotional journey through the past up to now. 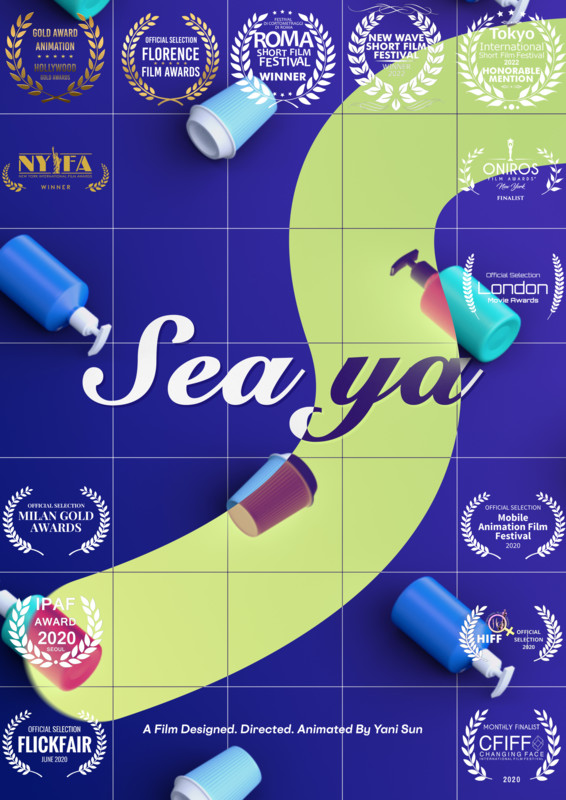 Sea Ya
Duration: 1:54
Director: Yani Sun
USA, 2020
Sea ya is a 2D and 3D animated film about plastic pollution, especially in the ocean. The story trace the journey of so-called single-use plastic products from their first use to their infiltration of human bodies. 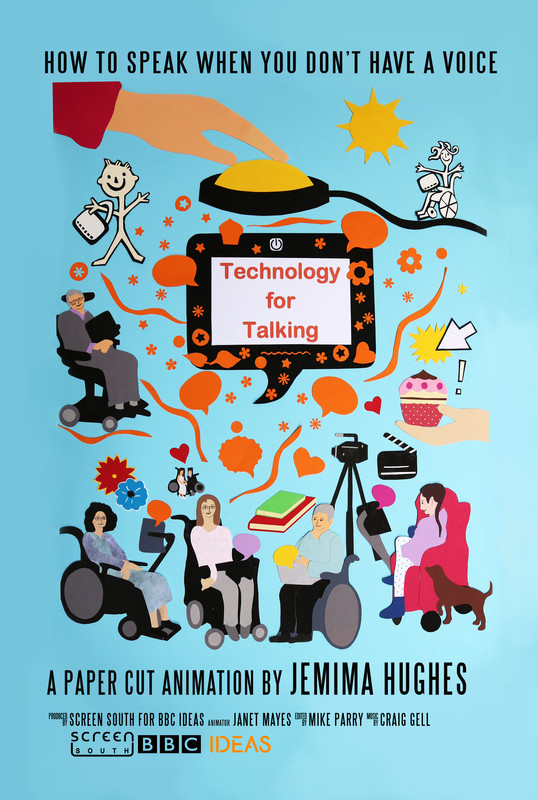 Technology For Talking
Duration: 5:23
Director: Jemima Hughes
UK, 2019
Technology for Talking is a bright cut out animation which introduces voice output communication aids and explains how and why some people talk using assistive technology. Using the electronic voice and perspective of its disabled filmmaker, it challenges stereotypes about what non-speaking disabled people can do and raises awareness of their contribution to society. 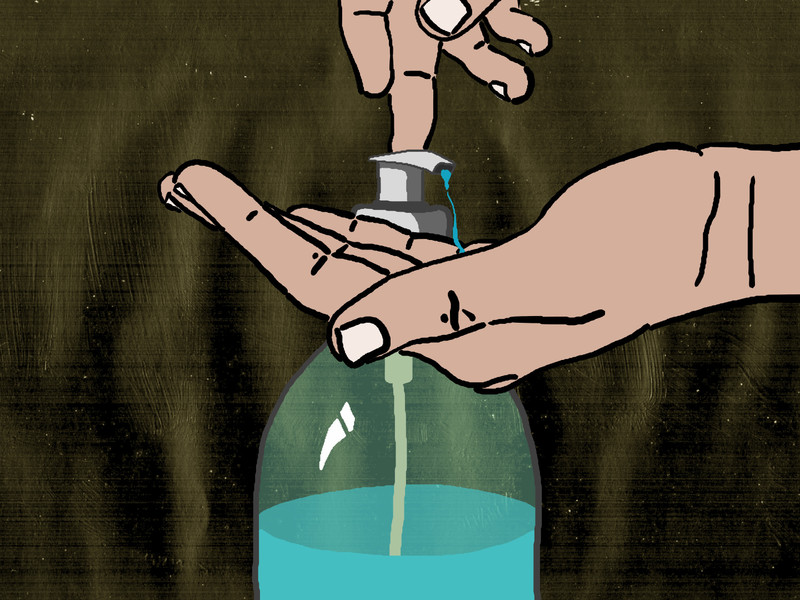 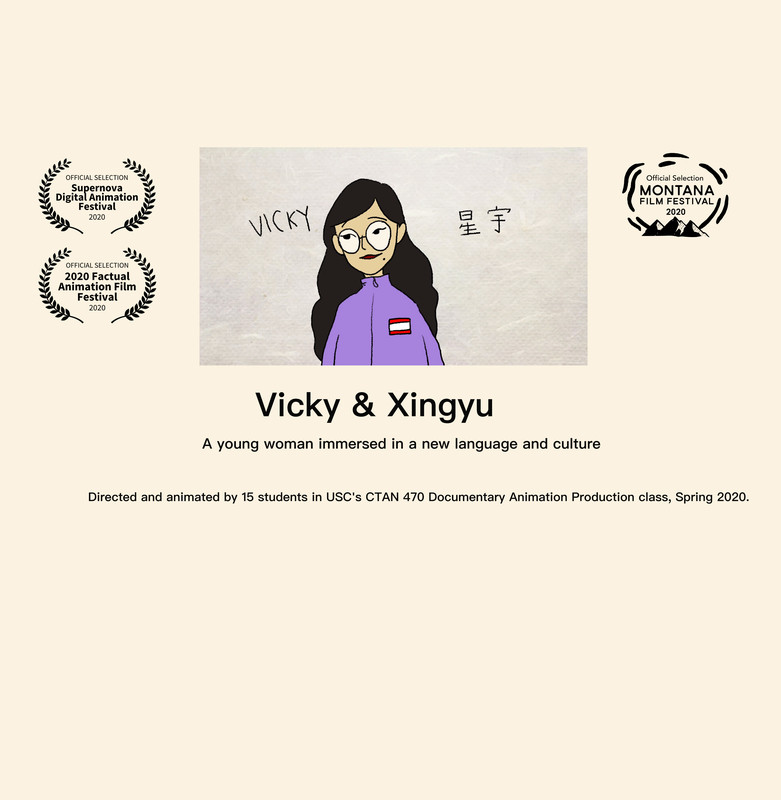 Interviews
Interview with Isha Mangalmurti about ‘Beyond borders’

Interview with Anna Benner about ‘All Her Dying Lovers’

Interview with Peter Roch, Jason Davidson and Matthew Davidson about ‘The Forgotten Voices of D-Day’

Interview with Daniella Bokor and Leanna Berkovitch about ‘Fata Morgana’

Interview with Alexandra Ramires and Laura Gonçalves about ‘Drop by Drop’

Flora Martyr on ‘Together | Fragmented’

Not For Money, Not For Love, Not For Nothing interview Animated Documentary.com award: Not For Money, Not For Love, Not For Nothing, directed by John Robert Lee

Read about the FAFF 2020 on Animatedcoumentary.com 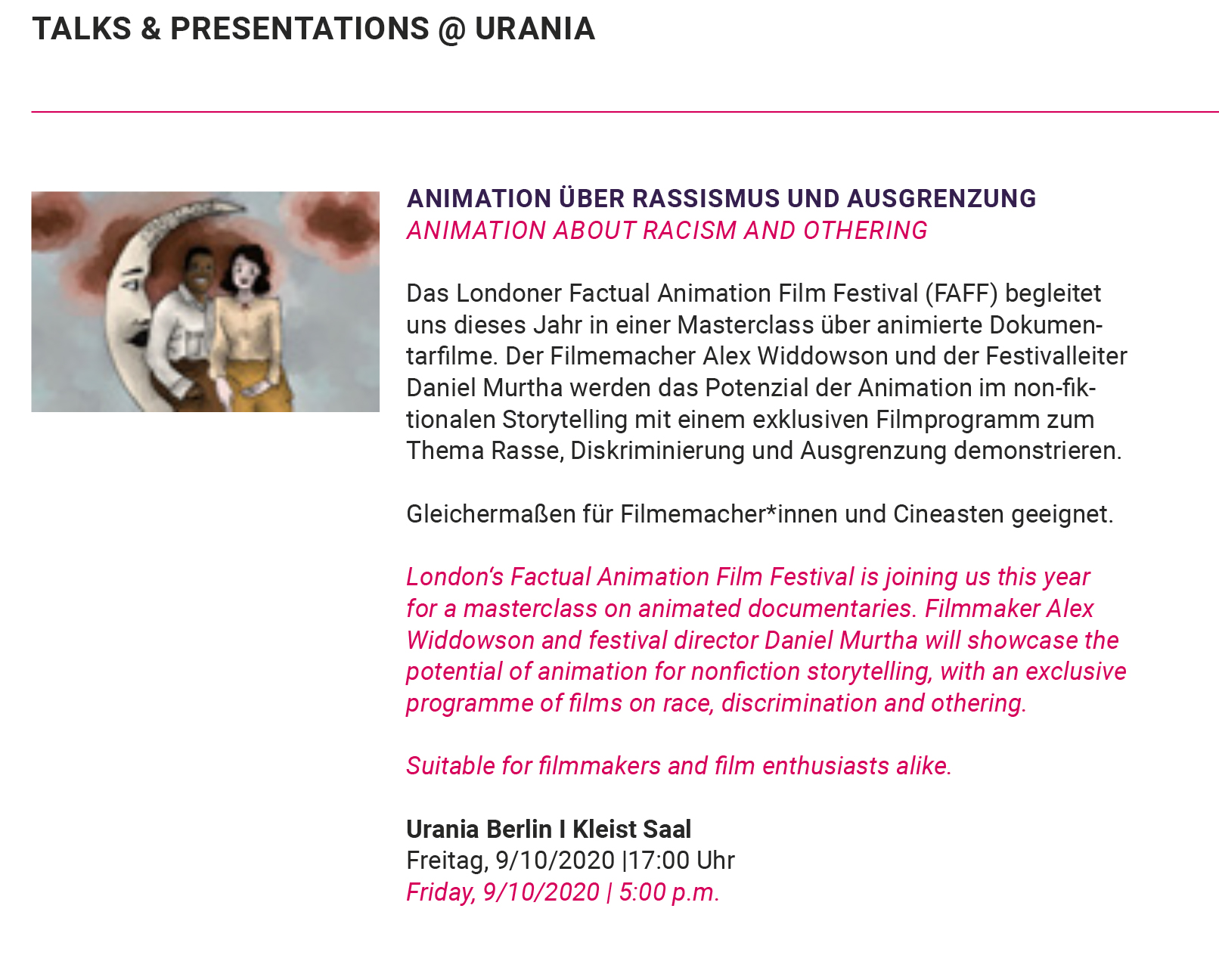 Read about the Festival of Animation Berlin 2020